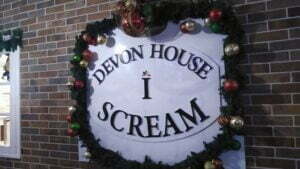 I have intended to write a post about Devon House Ice for a long time, but I am just getting around to it.

TikTok videos of tourists trying Jamaica’s favorite ice and complaining about prices and long lines without providing much background gave me a renewed interest in writing about one of my favorite places to hang out in Kingston.

If you are a visitor to the island, you might wonder whether Devon House Ice Cream is worth the hype, what the cost is, and what else there is to experience on the property. I am here to guide you.

Discloser: I am Jamaican and spent most of my adult life in Kingston. Since discovering Devon House Ice Cream, I have nothing else in its category to compare it to, aside from Boskin Robin, which I tried once and had an allergic reaction to, so I never eat it again.

Therefore, if I tell you it’s the best ice cream in the world, it’s based on my limited experience eating other ice creams.

It’s the best ice cream in the world; however, Devon House is more than just ice cream. It’s an experience; it’s Jamaica’s culture and history.

Well, that’s what I think.

In the 1600s, King Charles II gave 600 acres of land called the glebe to Reverend Zellers. This land included the place that would later be called Devon House.

In the 1700s, the St. Andrew Parish Church built a house for the church leader on the Devon Penn land.

This house, called the rectory, was used by the church leaders for 128 years. Then, in 1881, they sold the rectory to George Stiebel, who became the first black millionaire in Jamaica through gold mining. Stiebel built the Devon House mansion on the land.

In 1923, Reginald Melhado bought the property. He was a successful businessman. However, the final sale agreement only included 11 acres of land originally from the glebe land. The other 40 acres were made into roads like Waterloo and Devon Roads.

Cecil Lindo bought the mansion In 1928; he was known for being a savvy and successful businessman. He owned a company that made alcohol and bought the J. Wray, Nephew, and Monymusk estates.

After Lindo died, his wife Agnes moved to New York, and the mansion was empty. Then, in 1965, the government of Jamaica learned that developers would destroy the estate. So they used the National Heritage Trust Act to prevent its demolition.

The government then bought Devon House.

In 1974, the Prime Minister of Jamaica opened Devon House as the National Gallery. Later, in 1982, it was renovated and opened again by Queen Elizabeth II. Finally, in 1990, the Jamaica National Heritage Trust named Devon House a national monument.

Food Journeys Of A Lifetime, in 2011, named Devon House the fourth best place in the world to get ice cream. In 2017, the Minister of Tourism opened the mansion as Jamaica’s first Gastronomy Center.

If you are wondering where Devon House got its name, it came from the property’s original name, Devon Penn.

With many distinct flavors from local ingredients, there is something for everybody’s taste buds. Grape nut and pistachio are two of my favorites. I religiously buy those whenever I shop and occasionally sample the sorrel flavor with a double waffle cone.

I could describe the taste of the Devon House Ice Scream in many ways, but I am a man of few words.

It’s an excellent choice; it’s not marketing and hype.

All my friends and family love it, and I have never met anyone who dislikes Devon House Ice Cream.

You will understand when you try it for yourself.

What is the cost of Devon House Ice Cream?

Devon House Ice Cream’s main outlet is at the Devon House property on Hope Road in Kingston, but its entrance is on Waterloo Road, while the exit from the property is on Kings Road.

It is also available at several locations throughout the island.

These are some official locations:

In addition, they recently added mobile units that sell to communities in Kingston, Montego Bay, and Clarendon. See if they pass through your neighborhood or where their team will stop on their Instagram page.

Who is the owner of Devon House Ice Cream?

You might be wondering who owns Devon House Ice Cream.

The government of Jamaica owns the Devon House I’Cream brand through the Devon House Development Company (DHDC), an agency of the tourism ministry. They are also responsible for the property.

While Jamaica has several locations to buy the world’s best ice cream, it tastes better at Devon House. The flavor and ingredients are similar, but it felt wrong to buy them elsewhere. Therefore, I only have Devon House Ice Cream at Devon House.

Waiting for long doesn’t matter; I will stay if I want it enough to go during busy periods.

The charm of the Georgian-style building, the well-kept lawn, and the atmosphere add to the experience. Just know you will kill a few hours if you go during the busy period.

You can’t just grab an ice cream and go. Instead, you must sit on one of the many benches under a tree, walk around the property, and engage your taste buds.

You will enjoy this experience more when there are fewer people. Therefore, avoid Devon House on holidays and late afternoons on weekends.

Things to do on the property

While Devon House is famous for its ice cream, several things can make your visit special.

How much does it cost to tour Devon House?

I have been going to Devon House for over twenty years and have never felt unsafe or heard of any incidents. There is security on the property, and the area is not known for crime. However, I always advise people to be safety conscious, regardless of location.

There are always evil people among us, and you don’t know their plans. Kingston has a bad reputation, but the area around Devon House is considered safer than other parts of the city.

Devon House Ice Cream is a must-try for visitors to Jamaica. Not only is it considered one of the best ice creams in the world, but the property also offers a unique experience of Jamaica’s culture and history.

You can learn about the property’s rich past dating back to the 1600s, and indulge in various locally sourced ice cream flavors.

Though it may be a bit more expensive than regular ice cream, the quality and unique experience make it well worth the cost. So if you’re ever in Kingston, stop by Devon House and try a cone.