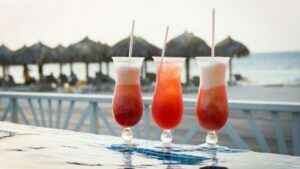 Earth, wind, and fire are three critical elements needed for life on this plannet, but for Jamaica to exist, a third element is a necessary_ rum.

So crucial is this ingredient it shaped the entire history and culture of the island. Wars were fought, people were enslaved, and empires became wealthy and powerful.

Although Jamaica is known for marijuana made famous by reggae and Rastafarian culture, in reality, rum is more accepted and consumed by the mass.

Not to say that Jamaicans are a brunch of laid happy go lucky rum-drinking drunks, but the alcohol plays an integral part in our everyday life. It is ingrained in every aspect of life, from cooking to rituals, parties, and festivity.

Jamaicans are joyful people; we like socializing, eating, drinking, and enjoying life. Therefore, any excuse for a party or celebration is acceptable.

From birth to death, your entire life is a celebration, and of course, there are no festivities on the island without alcohol. Here are some occasions on the island when drinking is a must, birthday celebrations, weddings, family gatherings, sports events, parties, all holidays, weekends hanging out with friends, and when someone dies.

Like most cultures, when loved ones die, it is a sad occasion, but Jamaicans always find ways to make the best of a bad situation. Funerals are held within a short time in most cultures, but it is not the case in Jamaica. It could take months before they bury the dead; there is a lot of drinking between death and burial.

It starts with a nightly visit to the dead person’s home, where friends and family talk, share stories, play dominoes, and drink rum.

This continues to Nine Night, where they share a special meal of fish, bread, and, of course, more alcohol. The nightly visit continues until grave digging; if it is in a rural area, the burial is on a family plot. Grave digging is a festive event where the entire community comes out, and you know where is a gathering; there is always food and alcohol_ lots of rum.

Setup is the next big celebration which takes on a party vibe with a music band or sound system, depending on the individual’s lifestyle. And you guessed it, more food and alcohol.

For some people’s funerals, the next day is a big parade with music, dance, laughter, and more food and alcohol.

Rum bars are to Jamaica what igloos are to Eskimos. It is impossible not to see one in every corner, even the ocean_ The Pelican Bar.

You might think Jamaica must have a problem with drunkenness since alcohol is so accessible and drinking engrained in the culture. But that’s not the case.

Mostly men hang out at bars, and drunks are looked down on and ridiculed. Also, Mucohism is a big part of Jamaica’s culture, so a man must know how to handle his liquor. If not, he becomes the but of all jokes among his friends and community members.

Seeing someone drunk beyond the point of bodily control is a spectacle. However, there are men in every community who we call rum heads. They are the neighborhood drunks who behave boisterously, talk crazy and lose all sense of themself. Nevertheless, people find it amusing and will even get them drunk for entertainment.

Drunken bar fights are not common on the island; you won’t see brawls at a bar or pub. Instead, you will see heated debates or arguments, but most times, it is just talking and bantering among friends.

Buy ‘mi a drink, nuh’, or ‘let me buy you a drink’, are often used at meet-ups at bars, especially among friends who haven’t seen each other for a while.

The only free drinks, you will get are those your friends or group members pay for. Also, you are more likely to hear the bartender ask you for a drink if you are talking or having a long conversation, especially if she is attractive and flirtatious.

Jamaica’s legal drinking age is 18 years old, so if you are over 18, you can legally buy and drink alcoholic beverages on the island. While they enforce the law, it is not as strict as in places like the USA. As a result, children in Jamaica have easy access to alcohol. It is the norm to see teens at parties freely consuming alcoholic beverages. In addition, parents and adults sometimes send children to buy alcohol from neighborhood shops and corner stores.

Nightclubs and some entertainment events may ask for Id If they suspect you are underage. At all-inclusive resorts, armband colors identify guests under eighteen; therefore, they are not served alcohol.

Drinking and driving in Jamaica

Like most countries, drinking and driving in Jamaica is illegal. So if your blood alcohol concentration is over 0.8, you can be arrested and charged with driving under the influence. If guilty, you could pay a JA $3,000 fine or spend up to six months in prison.

Jamaica has a problem with reckless driving and accidents. Yearly road fatalities are consistently over 300. Drunk drivers cause many of those deaths, especially at Christmas and New Year, which tend to peak, so please dont drink and drive.

Where Can I drink in Jamaica?

In countries like the US, you cannot openly consume alcohol in public. However, there are no such restrictions in Jamaica. As a result, it is common to see people with open bottles of their favorite liquor drinking in the street.

While you can drink freely, there are restrictions on where you can buy alcohol. A spirit license is needed to sell alcohol legally in Jamaica.

With the unofficial record of the most bars per square mile, it is easy to find somewhere to order your favorite drink, from tiny shacks to large upscale establishments. So whether you want the local favorite rum and Pepsi or top-shelf liquor, there is a spot for you.

Drinkers in Jamaica have categories of alcohol to choose from

Rum is one of the cheapest the most popular drinks o the island. It is versatile and can mix and blend with various non-alcoholic drinks to create something unique. Unlike other beverages, rum is not drunk straight from the bottle or by itself. Instead, it is severed in a flask and chased with water, coconut water, Pepsi, fruit juice, and other drinks.

You can go to any bar and order as many flasks of rum as you like.

Warning: Rum has a high concentration of alcohol; do not drink it like wine, beer, or stout. It could send you to the hospital or the afterlife.

Growing up on the island, I have always heard about this mysterious rum called John Crow Batty. John Crow is the name for the Jamaican vulture, while batty means bottom.

Its reputation causes the most seasoned rum drinkers to shake in their boots.

Being a seasonal drinker, I had never tried it, but I suspect the alcohol concentration might be over 70 percent.

It is not a branded drink and is only available underground.

These are some popular Jamaican rum brands.

There are other imported bands from other islands, but the top three are on every shelf.

Regarding beer on the RedStrip, the world’s coolest beer dominates. It’s the only local brand I know, although a few other imported brands, such as Heineken, are also popular.

Redstirp comes in many types. First, you have the iconic beer for regular drinkers, then Redstrip Light for light drinkers. Red Strip Light contains little alcohol and flavors such as sorrel, melon, apple, and lemon. It’s a favorite choice for females and light drinkers.

Stouts and beer are the same: alcohol level, darker color, and base material make stout distinctive. In Jamaica, beer is associated with masculinity; therefore, it’s a man’s drink. The tall, dark bottle is iconic in dancehall and rude boy culture.

Guinness dominates the local market in the dance hall culture; it’s more revered than Redstripe. Another brand Jamaicans like is Dragon.

There are other brands, but those are the most popular.

Growing up in Jamaica, wine was not a big part of the culture. However, things have changed with more people traveling and getting exposed to other cultures. Wine drinking is a niche in Jamaican culture; however, Red Label Wine has been entwined into the dance and local culture for decades. Just like Redstripe Beer and Genis Stout, it has its primary consumers.

While many brands of rum and wines are on Jamaican shelves, I highlighted the most popular ones and those the average Jamaican consumes.

Can I take rum from Jamaica?

You can buy Jamaican rum and take some of the island’s spirit. There are two options;

Duty-free after you check in at the airport, which you can take on the plane. The next option is to buy elsewhere, but you have packed it in your check on lugged.

It is cheaper to buy at the supermarket or wholesale than at the airport.

If you want to learn about the history of rum making and sample some of the island’s best, you have three options.

Drinking is an integral part of jamaica culture; rum is the most popular drink, followed by beer, stout, and wine. Eighteen years is the legal drinking age. You can drink at the island’s rum bars or entertainment venues. An important rum event is the Appleton Rum Festival, Held Annually in June at the Hope Garden In Kingston.

Remember to drink responsibly, and if you drink, please dont drive.