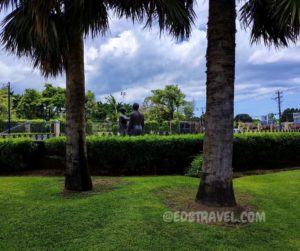 Emancipation Park in Jamaica is a little oasis in New Kingston. It’s a perfect balance for the grit and hustle of the capital—this green space reflects the island’s greatness and potential.

Built to commemorate the ending of slavery in Jamaica, this seven-acre property caters to the recreational needs of Kingston’s residents.

One of the best-kept parks on the island set the standard for public spaces. It shows that Jamaicans can build and maintain significant monuments without foreign aid.

The seven national heroes’ busts and placks highlight their exploits, reminding people of their strength and courage. Their presence reminds us of where we are coming from and our potential. It’s the perfect place to rejuvenate and get some inspiration when feeling down.

A running turf and open space for games and exercise show the island’s love of sports and athletics.

An open-air stage provides a space for practice and showcasing the island’s music and performing arts. Perfect for exposing and developing the next superstar.

Freedom, the love of nature, a hallmark of the country, reflects in the wide-open space, flowers, and trees, which attract beautiful songbirds giving the feeling of a true tropical paradise—the only thing missing is the beach.

Emancipation Park in Jamaica, how did it come about?

The Emancipation Park started with the Liguanea Club in New Kingston. They donate seven acres of land to the government of Jamaica. It was undeveloped for many years while the government decided what to do with such prime real estate.

Some government members wanted a business district; others suggested a multipurpose entertainment complex.

Liguanea Park, its last name, was a dust nuisance; apart from the occasional football (soccer) matches and seasonal carnival fete, nothing much was done there. It was an eyesore in New Kingston.

Not having the capital to put any of their plans in place, the government turned to the National Housing Trust (NHT). They sold the property for JA$1, on condition that they build and maintain a public park, reflecting the theme of emancipation and freedom.

The NHT had three months to complete this project for the emancipation celebration on August 1, 2002. They built a world-class facility with the expertise of architect Kamau Kambui and a large team of workers. The opening ceremony for Emancipation Park in Jamaica took place on July 31, 2002.

A central theme in the design of Emancipation Park is that freedom from slavery is acknowledged in many ways. The most apparent of these is the controversial “Redemption Song” statue at the entrance to the park, bearing the line, ‘None but ourselves can free our mind.

What to do at Emancipation in Kingston, Jamaica

You can do many things at Emancipation Park in Jamaica; below are some highlights of things people do at the park.

Chill by yourself or with friends.

Kingston is very hot, especially in summer; the park has many benches and shade where you can chill. You can meet up with friends or sit and enjoy the cool breeze. It’s one of the safest places in the city and has security.

Live shows take place regularly at the park. The stage and wide-open space make it perfect. Depending on when you visit, you might catch a live reggae show or a promotional event. It’s a public space, so you enter free of charge.

With everybody being health-conscious, it’s common to see Kingstonians running on the 500m trail. Many people come to the park just to run. The surface is covered with a soft material, which makes it comfortable to use.

Early mornings or late afternoon is the best time to jog if you cannot tolerate the heat. It is safe so you can even go at night. The park opens from 5 am to 11 pm, so it’s easy to fit into your schedule.

On any given day, you will see people exercising at the park. It is a popular spot for fitness trainers who want open space to work with their clients. On some days, there are instructors giving dance lessons. Yoga and karate are some activities that take place there.

The children also have a play area with bars and swings. Adults can also use it for callisthenic.

Playing Ping Pong is an excellent way to exercise. Emancipation park caters to that with two ping pong tables, which are always occupied, especially in the evening.

Hop Scotch, a fun children’s activity, is also done at the park.

Emancipation Park is the perfect backdrop for wedding pictures. It is popular with newlyweds. Weekends usually are busy with couples doing wedding photoshoots. The beautiful flowers, tree manicured lawns are perfect for striking a pose.

Bird variety may not be numerous as Hope Garden, but there are enough to entertain you. Hearing birds singing in the trees is soothing. You feel like you are in the mountains, in the middle of the city.

A bust of the National heroes with placks telling how Jamaica got to this point is hard to miss. Next to the redemption statue at the entrance, they are the most prominent feature of the park. Without the island’s liberators, there wouldn’t be an Emancipation Park in Jamaica. So it is only natural that they are featured prominently. However, visiting the National Heroes Park would be perfect for a better display of the island’s national heroes.

These are some well-known places that are near Emancipation Park.

These hotels also have upscale restaurants where persons not staying on the property can eat.