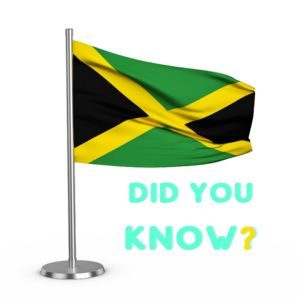 Beautiful resorts, Sports, Bob Marley, and Reggae music are at the front of most people’s minds when they think of Jamaica. These are all attractive aspects of our country that we are proud of, but there is much more. Here are fun facts on Jamaica that give you a unique perspective of the Island.

Jamaica is one of the largest independent nations in the Caribbean. Cuba, Haiti, and the Dominican Republic are more significant, with populations of 10,000,000 citizens. However, Jamaica outnumbers English-speaking countries, twice the population of Trinidad and Tobago, and three times Guyana.

Many people know of the Haitian revolution that started in 1791. But many are not aware of the similar event that almost took place in Hanover, Jamaica, two decades earlier.

In October 1776, enslaved and freed blacks were plotting to kill all whites on the plantations and take their freedom. They waited for the perfect opportunity to execute their plans.

No ships were docking, nor were soldiers stationed on the Island. Instead, they have gone to the USA to replace service members killed in battle.

Plantation owners were wary of a slave rebellion because they had to squash several in previous years. However, they did not foresee enslaved people working with freed blacks.

Jamaica’s history took a different course because a head servant who was to shoot his master and start a chain reaction got cold feet. He was hesitant and aroused his master’s suspicion. Nevertheless, his confession led to the discovery of the plot by the enslaved and freed blacks to kill all white people in Hanover. Click here for more.

Facts on Jamaica, Port Royal, once called the wickedest city on earth

Port Royal was once called “the richest and wickedest city on earth.” Primarily renowned for its connection to pirates, Port Royal’s legacy stretches back to Jamaica’s indigenous inhabitants, the Tainos.

The Tainos first used Port Royal as a fishing camp. Then, when the Spaniards arrived in Jamaica, they used the sand spit for cleaning, refitting, and caulking their sailing vessels.

When the British invaded Jamaica in 1655, realizing its strategic importance, they put fortifications in place.

During the 17th century, it was the virtual capital of Jamaica and also a headquarters for buccaneers and pirates who brought in much of the treasure they looted on the Spanish Main. Chief among the buccaneers was Henry Morgan.

On June 1692, an earthquake destroyed most of the city. A large section of the town sank into the sea, and many people died.

A fire and three hurricanes ensure that the town never returns to its former glory. So the serving inhabitant moved their activities to Kingston, a less healthy but safer site.

Check out this post for the history of Port Royal and its present condition.

Jamaicans contributed to World War 1 by providing soldiers and food supplies for the British army. The British West Indian Regiment consisted of men from Jamaica, Barbados, British Guyana, and Trinidad and Tobago.

One hundred eighty-five men from the regiment died fighting; however, far more perished from sickness. They redirected the troopship Verdala carrying a third Jamaican contingent to Nova Scotia in 1916, a sterile environment they were not used to. Without adequate clothing, many men were incapacitated or died of frostbite and pneumonia.

Jamaica provided soldiers and was a place of refuge for civilians fleeing from conflict in World War 2. Many of those refugees came from Gibraltar and other German-occupied Europian Nations. They stayed at the premises where the national stadium is now located and the present-day location of UWI Mona.

Jamaica was a base for American soldiers searching the Caribbean sea for German submarines. In addition, goat Island, Vernam Field, New Castle, and Up Park Camp were military bases occupied by American and British troops. Some of these locations were also holding centers for German POWs.

Some of these places are used by the Jamaica Defence Force (JDF), while others remain remnants.

Mary Jane Seacole was the first nurse practitioner, born on November 23, 1805, and died on May 14, 1881. She was a British Jamaican nurse, healer, and businesswoman. She worked behind the lines during the Crimean War despite not being trained by the British, nor was she welcome.

When her request to join the war was denied, she paid her way and set up the British hotel. There she treated wounded soldiers and brought them back to health. She learned herbal medicine from her mother and experienced healing the sick in Jamaica. She bravely and skilfully used these to help injured service members on the battlefield.

KPH, the largest hospital in the English Speaking Caribbean

Public institutional medicine was first established in Jamaica with the opening of the Kingston Public Hospital on December 14, 1776. Originally it catered only to the white Jamaican population, but this changed in 1838 after emancipation. It is the largest hospital in the English-speaking Caribbean.

KPH has gone through many changes from almshouse to mental asylum; however, the asylum moved to Rae Town in 1850 and is now known as Bellvue.

The Kingston Public Hospital offers full service and operates twenty-four-seven. Its accident and emergency treat 200 to 300 patients daily and 90,000 annually. Doctors look after over 2000 outpatients daily.

At 244 four years old, KPH is among the oldest hospitals in the Americas. Click here for more information on KPH.

Before there was Reggae and Dance Hall, there was Miss Lou. She is the first person to bring the Jamaican language (patios) to the mainstream. She paved the way for our indigenous dialect to get acceptance by the upper-class Jamaicans who controlled the media.

Louise Bennett was born on September 7, 1919, and died on July 26, 2006, in Toronto, Canada. She was a Jamaican poet and activist. She received her education from Ebenezer and Calabar Elementary School, St. Simon’s College, Excelsior College, and Friends College (Highgate). A British Council Scholarship took her to the Royal Academy of Dramatic Art, where she studied in the late 1940s.

She was Jamaica’s leading comedienne and poet. Miss Lou expresses Jamaican’s authentic emotion using the Island’s colorful dialect. Her wits and understanding of patios and the Island’s culture were tools she used to captivate her audience and have them in stitches.

Miss Lou made Jamaicans feel confident expressing themselves in their native language when only the Queen’s English was acceptable. She was a DJ long before they coined the word. Reggae, Dancehall, and others that spawned from them exist because of the foundation she laid.

Louise Bennett lectured extensively in the United States and the United Kingdom on Jamaican folklore and music. She married Eric Winston Coverley in 1954 and had one stepson and several adopted children.

Jamaica has a long history of freedom fighting. It started with the Maroons, who fought the British to a truce. Marcus Garvey took that spirit to the international stage, where he tried to organize black nations and separate them from the colonial system. As a result, he gained a considerable following and worldwide recognition while influencing many African countries and blacks in the Americas.

His message of black liberation and self-reliance made him an enemy of the colonial system. They tried many things to stop his influence, eventually charging him with mail fraud. They imprisoned him for five years and deported him to Jamaica.

He tried to establish trade with the Americas and Africa through his ship line, The Black Star Line, but sabotage by agents of the system ensured this never materialized. In addition, his imprisonment and deportation negatively affected the movement. As a result, he never regained popularity despite moving to England to revive the organization.

Marcus Garvey died in 1940 in England, but his body did not return to Jamaica until 1964. He became the first national hero and is buried at The National Hero’s Park In Kingston. Click here to read Marcus Garvey’s biography.

Usain Bolt’s performance at the Olympics captivated the world. Now whenever anyone mentions Jamaica’s Olympic team, Usain Bolt is at the front of their mind. Wins at three consecutive games are extraordinary, but he is not the first Jamaican to win at these games.

Arthur Wint might mean nothing to the Bolt fanatic, but he set the trend. He won Jamaica’s first Olympic gold medal in the 400m, fourteen years before Jamaica’s independence. In 1948 he beat his team and favorite Herb McKenley for the gold medal. Arthur Wint was also second in the 800m and missed the third medal when he pulled his leg in the 4x400m race.

He competed at the 1948 and 1952 Olympics, winning two gold medals and two silver. Arthur Wint died in Linstead, Jamaica, on Hero’s Day, 1992. He was 72 years old. Click here for more on Arthur Wint.