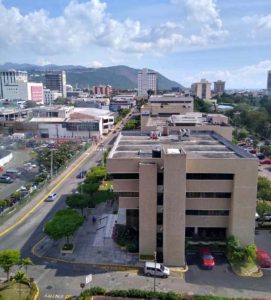 Kingston, Jamaica is not safe; stay in the tourist areas on the north coast and never go to the capital.

That’s the advice people not familiar with Kingston give. You cannot provide accurate information if you don’t know a place. You will take things out of context and regurgitate sensational news headlines.

We cannot deny that sections of Kingston have a crime problem, but it is not the entire city. Therefore condemning a whole population because of the terrible reputation of some areas is unfair, but I understand.

Like many people, I was fearful of the city. For most of my childhood, growing up in rural Saint Catherine, I heard Kingston is dangerous.

However, my perspective changed after I have lived and work there for over 20 years. I no longer fear the capital because I understand its dynamics.

No blood-thirsty headhunters are roaming the streets looking for victims. You are unlikely to get attacked by random strangers without provocation. I had never been the victim of a crime, although I came close once. Street smarts and taking decisive actions change my fortune. Not going to share the details, but I was in an area known for robberies and violence.

Kingston is safe, depending on where you are in the city. Based on the local news report, police data, and local knowledge, most crimes occur in the ghettos, where poverty and unemployment are high. The USA State Department warns its citizens from the following areas in Kingston;

In these neighborhoods, domestic disputes, gang wars, and revenge are the reasons for most murders. Residents don’t trust the police or the justice system, so they settle disputes themselves. They also try to get justice for murdered family members or friends by taking revenge, resulting in a perpetual cycle of violence.

Broken families make it easy for gangs to recruit boys. Absent father leaves children vulnerable to sexual and other types of abuse. Most absentee fathers are in jail or murdered.

Unemployment is high, so people hustle or take part in illegal activity.

Inner-city culture is a conveyor belt of violence and criminality.

Despite its many challenges, these communities produced many outstanding Jamaicans. They excel in all sectors of society, business, education, entertainment, politics, and sports.

Down Town Kingston at the Waterfront is beautiful despite its problems.

Ghettos are all over the city. Wherever there is a pleasant neighborhood, a community with a poor reputation is beside it. Kingston gets a bad rap because of the problems in these places.

Downtown is the most unstable section in the municipality, Kingston Wharf, and the largest commercial district on the island is there.

There are plans to fix Downtown Kingston and change its image, starting with the waterfront. They are building a broad walk from the Victoria Pier to Palisades.

The waterfront is beautiful. You can watch planes take off from the Norman Manley International Airport and see ships sailing into the port.

Viewing the sunset from there is impressive.

It is safe to hang out at restaurants and bars or tour the craft market.

There are many multistory buildings on the Waterfront. The Rok Hotel will be an addition to the landscape.

These neighborhoods are not crime-free, but the constant threat of violence, as in the ghetto, is not there. However, like the rest of the capital, crime affects them.

Most residents are working-class people; when they are away, criminals break into their homes.

The proximity to inner-city communities and the perception that they have valuables make them a target. Thugs on bikes or in motor vehicles frequently commit robbery in some areas.

Criminals roam these areas looking for an easy victim, so be vigilant. Lock your doors/ and don’t make valuables visible from the street. Check if someone is trailing you on your way home. You are most venerable when you’re transitioning from your vehicle. Many home invasions start here.

The middle class and the upper class live in these communities. They don’t have the same social problem as the inner city areas, so crime is low.

They have neighborhood watches, private security patrol in some communities, alarms, and security cameras in most homes.

Business leaders, politicians, and wealthy and powerful people live in these neighborhoods. Expats and returning citizens love these locations because it is safe. Most of Kingston’s hotels and Airbnb are in or near these upscale communities.

There are even exclusive neighborhoods where only members or guests are allowed. Therefore, it is difficult for criminals to roam freely.

Murder rarely happens when it does because of an individual connection with the underworld or a family dispute.

Are shopping areas safe in Kingston?

Downtown is the favorite shopping spot for the poor and working class. It is not the safest place to shop because of hoodlums from neighboring communities. They are a nuisance to vendors in the market district, often taking their goods without paying.

Gang warfare usually occurs in market districts; they trade bullets and kill each other on the busy streets in front of shoppers. Innocent bystanders sometimes get caught in the crossfire.

Law enforcers are always visible downtown, but offenders are not afraid.

The town is always busy, and shoppers are primarily unmolested, apart from vendors trying to hustle. There are reports of robberies of people who have collected sizeable sums of cash or displayed expensive items.

If you plan to venture, Downtown, take these precautions.

People are afraid to go Downtown, so they look for deals in Crossroads. There are few stores, but safer than Town and cheaper than Uptown. You can pick up fresh fruits and food at a small market there.

Take the same precaution as Downtown.

Shopping is safer, and there are more Malls and plazas to shop. Some popular areas are New Kingston, Halfway Three, Constant Spring Road, Sovereign, and Manor Park.

Although it is safe to shop, prices are high. Most merchants accept US dollars and credit cards. Shop with local currency, and don’t let your card leave your site.

Private security guards and police are always present; if you have any problem, ask them for help. Don’t let down your guard because you are in a safer environment; crooks are everywhere.

Enjoy your stay in Kingston, one of the liveliest cities in the Caribbean, but don’t become a victim. Follow the safety guidelines outlined, and you will be ok.

Is Kingston safe for entertainment?

Anybody who knows the Kingston party scene will tell you that the hottest dancehall parties occur in the ghetto. That’s where the music originates. Events are most times held in the street and are free. You get an authentic cultural experience.

If you want to go to these events, get a trusted escort. It is unsafe to wander around in these places, especially at night. Gang conflict is a constant threat, so music and fun can change quickly. Drive-by shootings are also common.

Many foreigners stay at Airbnb in some of these communities, especially those who love dancehall and reggae. There have been no significant incidents of crime against them.

Parties and music festivals take place in uptown and safer areas. Most are staged indoors, and everyone has to pass through security. Police also monitor these events.

The club activity is extensive in Kingston. You have many to choose from; they are in safe and secure areas of the city.

There are bars and restaurants in Kingston where you can safely eat or drink at night.

Like other major cities, crime can happen, be smart and make wise choices. Don’t be too trusting.

Is transportation safe in Kingston?

The government bus system is safe. Apart from pickpocketing and no major crime takes place. Plain close police travel on these buses, so criminals avoid them. These are the big yellow buses.

The coaster buses are undisciplined and frequent by thugs. Avoid them as much as possible.

Use legal taxis; they have a red license disk, a black or yellow checker on the sides, a taxi sign on the top, and an id picture inside to identify the driver.

Although licensed taxi is safer, there are horror stories, so exercise caution. Let someone knows when you are leaving and when to expect you. Send a text or picture of the registration number to someone before boarding.

It is safer to call a taxi company to send a driver to pick you up from your location. The fare is affordable.

Check out this post to learn how to travel on Jamaica transport.

Kingston’s inner-city communities commit most of the crime in the city. Unemployment, broken homes, gang culture, and a weak justice system fuel this problem. Nobody randomly attacks and kills people; the victim usually knows their attacker.

Most places in Kingston are safe, but you still need to be cautious. Thieves like to roam upscale neighborhoods looking for vulnerable targets. Practice good safety habits and be responsible. Avoid crime hot spots and people involved in a gang or criminal activities.

Get an escort if you must go to the inner city or an unfamiliar area. Prefavorably someone trustworthy from the community. If you are exploring cultural activity in a particular neighborhood or historic site, go with a tour group.

Here is my simple advice to help you stay safe in Kingston and anywhere in the world. Don’t go to stupid places at stupid times to do silly things.