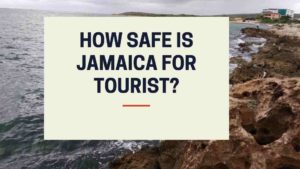 If you plan to visit Jamaica or have it on your bucket list, I am sure safety is one of your primary concerns. A quick search on crime will reveal some heart-wrenching stories—Enough to scare anyone from setting foot on the island.

The country has a murder problem, but its complexity does not always show in sensational news headlines. Jamaicans are not crazy, bloodthirsty people running around killing random individuals. Although the numbers might suggest otherwise, you are not going to a war zone.

Yes, there are urban areas in Jamaica that are like a battleground. Citizens lose their life often because of gang violence. This is not unique to Jamaica; cities in North America are worse than Jamaica’s, the most dangerous ghettos.

However, based on statistics, the possibility of being a victim of crime is higher than in most regions. Since the 1970s, the island has been in the top twenty countries for murder per capita, sometimes even topping that chart.

Is Jamaica safe? Let’s look at some numbers, then give you the perspective of a native living here for over three decades.

Facts on crime in Jamaica

Murder is out of control; here are the numbers. The bar graph shows murders per one hundred thousand inhabitants for the past six years.

Since 2014, there has been a steady increase, with 2017 being the highest. For these six years, 7,792 people got killed on the island, with an average of 1,298 murders each year. This number is alarming for any country.

There are many theories why Jamaica’s situation has gotten out of control. But unfortunately, it would take an entire book to scratch the surface. So I will not touch on that topic.

Let us look at another statistic that’s a good indicator that a country is safe_ sexual assault.

In Jamaica, sexual crimes are against females. However, males are also victims. Either by the opposite or the same sex, but don’t get reported.

I have only included two significant crimes, but others, such as robbery and physical assault. Even though these occur often and might affect visitors, they are not headliners like rape and murder.

Most tourist to Jamaica comes from the USA, Canada, and the UK. In 2017, a record 4.3 million visitors arrived on the island.

Let us look at the major crime statistics in these three countries and compare them to Jamaica.

Although recorded with the third-highest number of murders in the island’s history, Jamaica had record tourist arrival.

The data collection on rape victims differs in each country because of the law or cultural norms. However, I will compare the information shown without discussing variations in its compilation.

Jamaica is secure depending on your socioeconomic background and your lifestyle.

What do I mean by that? They slaughter a thousand people every year. How is Jamaica safe?

Even though murder is high in Jamaica, most homicides happen in a particular geographical area, the ghettos of Kingston, Saint Catherine, Saint James, and Clarendon.

The drug trade, gang feuds, revenge killing, domestic disputes, and the lottery scam cause most of these murders.

Yes, people are victims in other parts of the island, but they pale compared to poor inner-city neighborhoods.

If they removed these hotspots, murder would be 3.9 per 100,000 or less than the pre-independence range.

Murder in other areas results from domestic disputes and sometimes robbery.

Is Jamaica safe for females?

Women are not combatant in gang violence or significant players in drugs and organized crime. Instead, they get attacked by gang members because of their relatives or spouse.

Although most victims are guys, women, too, get caught up.

Females also face other dangers; domestic, sexual, and physical harm is high among Jamaicans. For example, they are more likely to be murdered by an intimate partner or an ex-spouse than men. It affects women of all socioeconomic backgrounds; however, it is higher in poor and inner-city communities.

The graph above does not reflect the reality of assault on Jamaican women, as in most countries. The abused are afraid to report because of fear, so it is under-reported.

Is Jamaica safe for tourists?

It is safer for tourists because most island offenses are among its inhabitants. In addition, based on the number of visitors and the crime committed against them, they are more secure than people living here.

The statistic on homicide and rape in the USA, Canada, and the UK, shows that travelers are more likely to be victims in their home country.

This might sound crazy, but tourists are safer here than in their country.

How could that be? Of the 4.3 million visitors in 2017, 12 reported sexual assaults and one murder.

That was a terrible year for tourism.

Tourism is an enormous part of Jamaica’s economy, so they protect it. Likewise, the locals and everyone involved does their best to safeguard the country’s reputation.

Tourists can venture into areas that many Jamaicans avoid and are unmolested. The residents in those communities welcome them and make sure they are secure.

Cultural tourism is growing; people stay at Airbnb in inner-city areas. They get an authentic experience with no incidents of harassment.

Visitors to these places bring money to the local economy, which residents appreciate.

How to keep safe in Jamaica

As you can see, Jamaica is not the safest tourist destination globally, but it is possible to enjoy the island without becoming a victim.

Jamaica is not the safest destination. It has a problem. Crimes committed against tourists are low, even for those who venture out.

Killings are not random; the victim usually knows their attacker. Organized crime, gang wars, domestic disputes, and the lottery scam cause most attacks.

You should always be on guard, whether on vacation or at home. Take safety precautions and make wise decisions. You will enjoy your stay here and have a memorable experience.