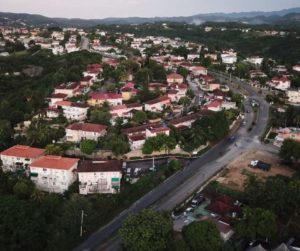 Is Montego Bay safe? This a question travelers are asking. The city has been getting a bad rap for the past few years. The epicenter of the infamous lottery scamming, gang war playing out in the streets, shootings, and murders, contrasting to tourists’ happy tourists sipping Pina Colada chilling on a beach.

The recently concluded State Of Emergency was an eye-opener. Seeing military personnel at checkpoints in the city was shocking. Some travelers canceled their reservations; others saw it as reassurance that they were protecting the tourism sector. It seems like Jamaica’s tourist capital was under siege.

Safety in Montego Bay depends on your location.

So you are wondering, is Montego safe? As you might’ve realized, Jamaica is a place of contrast and contradiction. Montego Bay is no exception.

Montego Bay is safe, depending on where you are and with who you are hanging. The coast, where you find most of the attractions and the mega-hotels, is safe—also, the upscale neighborhoods. If you are a tourist walking the hip strip, you don’t have to worry about getting attacked or robbed. Based on statistics, you are more likely to be the victim of a crime in your home country than in Montego Bay, even when you stray from the confines of your all-inclusive property and walk among the locals.

If you are from an inner community in Montego, involved in Lottery scamming, associated with scammers, gangsters, or even related to gang members, you are not safe. Most crimes that commit in the city result from one of the above or domestic disputes.

Things had changed somewhat since the 1940s and 50s when the North gully flooded the original settler in Meagre Bay, then what remained of their shacks were bulldozed by the government. They were a nuisance to the government and their prosperous neighbors. Their marches and riots in the town trying to get equality didn’t win them any favors.

The government wanted to provide lands for the low-income families of Montego Bay and formalized the entire city; however, families that owned the lands refused to sell to the Government. The people with nowhere to go built informal communities on lands owned by those families.

Members of these neighborhoods have been afraid for years. Poor infrastructure, broken families, unemployment, and gang violence made these areas unsafe.

The government and the powers that be cared little because it was not affecting their bottom line, the tourism cash cow. So they did nothing to fix it.

Violence and shootings occur regularly in some areas of Montego Bay, which has been going on for years.

They started caring when the lottery scamming hit international news and dented the city image as Jamaica’s tourist capital. Gangsters were getting reckless and started having shootouts in broad daylight on the main street near resorts, forced their hands. The widespread use of social media made even Jamaicans aware of what was happen that side of the island because everybody thought Kingston was the worse.

Are the resorts and attractions in Montego Bay Safe

The hotels in Montego Bay are safe. No gangsters carrying rifles are going to rob you. They are not stupid. They know if they mess with the industry, they will feel the government’s full force. Tourism being a significant source of foreign exchange for Jamaica, they will not let crime destroy it.

Therefore, they keep their conflict among themselves in their neighborhood.

Hotels and resorts have security and measures in place to protect guests. You can go on excursions to the many attractions in and around the city. No one is going to bother you or attack your tour bus.

Many travelers venture out because it is common to see bag packers in the city or explore local communities.

Jamaicans are warm, well-coming, and like to help strangers. We will give up our beds to visitors while we sleep on the floor. Foreigners are safer in Jamaica than some Jamaicans living here.

Despite the city being safe to travel, take precautions to avoid the troubled spots highlighted. Travel with someone or in groups. Get a trusted tour guide if you are unfamiliar with the area. Don’t walk with loads of cash and valuables. Follow the law, and do nothing illegal or shady.

The state of emergency with soldiers on the streets showed a different side of Montego Bay hidden from Jamaica and the international community. It doesn’t mean that the city is less safe. It’s just the government putting a lid on things before it spills over into the wider community.

Things have been improving in the inner-city communities with the measures they put in place. So Montego Bay will be a safe city for tourists and everybody.

You can still enjoy fun in the sun and drink your cocktail without care. Enjoy your time, but remember you are on earth among humans. So take precautions you would take at home.

Don’t be too trusting or let down your guard around strangers, even at the resorts. Evil people go on vacations too.