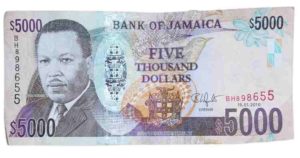 Since 1969, the Jamaican dollar (JMD) has been the official currency of Jamaica. As a result, the island’s monetary system changed from the pound to the dollar.

The Jamaica dollar is the currency of choice on the island, accepted everywhere, so there is no need to consider conversion. However, the US dollar is welcome in tourist areas. The cost of accommodation, attractions, goods, and services is USD.

If you are exploring the island, it is best to use the local currency. Not everywhere gets visits from tourists; therefore, prices are in Jamaican dollars. Merchants would have to convert your USD to local currency, and they don’t always give a fair rate.

At the writing of this post, the Jamaica $2000 note was not yet in circulation.

What is the best currency to use in Jamaica?

The best currency to use in Jamaica is the Jamaican dollar (JMD). Because it’s the country’s legal note, and everywhere accepts them. However, using the US dollar might serve you better if you are in a tourist area or staying at a resort. This is because they price everything in USD, so you don’t have to convert to Jamaican dollars. Also, your money value is less when you convert to the Jamaican dollar. For example, you will get 149 JMD for 1 USD, while if you change your JMD to USD, it will cost you 156 JMD to get 1 USD.

Therefore, if you are not traveling outside of the tourist areas, it’s best to use US currency.

While the British Pound and Canadian dollar are popular on the island, it is best to convert them to USD or JMD. Other currencies are not popular in Jamaica; therefore, it’s best to buy USD in your home country before arrival.

Does Jamaica take us dollars?

Yes, Jamaica takes USD; however, you might be disadvantaged in spending USD outside the tourist areas. Merchants in non-tourist location prices their goods in JMD because they cater to locals. Although most will accept USD, they will do the conversion to JMD. Their rates are usually lower than market value, which is beneficial to them and a disadvantage to you. So it is best to buy local currency at a money mart before you venture out.

If you plan to tip at your resort, the driver, or restaurants, USD, CnD, or British Pounds are ok. Jamaicans love these currencies because they value more than JMD. Also, they can easily exchange them.

Where to get Jamaican currency

The best place to get Jamaican currency is at the Cambio or bank. However, while you can buy JMD at Jamaica’s Airports, you will not get the best rate on the market.

Instead, use a Cambio at the Mall, Plaza, or gas station. There are many choices. You will need identification; a driver’s license or passport will do. Also, they will ask you basic questions, such as your source of funds.

The Jamaican dollar is not popular, so convert any you have left over before leaving the country. You will pay more the convert JMD to USD, Canadian dollars, or British Pounds.

Where is the Jamaican currency made?

The Bank Of Jamaica (BOJ) distributes Jamaican Dollars (JMD); however, they do not print them. Instead, they print outside the country by international firms. De La Rue International Ltd., Giesecke & Devrient Currency Technology GmbH, and Oberthur Fiduciaire print the bank notes.

The Royal Mint (UK), Royal Canadian Mint, Royal Dutch Mint, and Mint of Finland are the printers that make the coins.

Is it better to use cash or credit card in Jamaica?

Is it better to use cash or credit card in Jamaica? These are concerns many travelers to the island might have.

It all depends on what type of vacation you plan to have on the island.

A credit card is ok if you stay at an all-inclusive resort where you pay for everything before arrival and don’t plan to explore the island.

Any additional expenses you can charge to your room and pay with your card when departing. However, to explore the island, you will need cash. They accepted credit cards at most businesses on the island, especially in the resort areas. However, not everyone accepts international credit cards. So while you will have no problem paying for accommodation at large properties, small hotels might only use cash. Also, you will need some money for transport, buy on the street and pay for tips.

You might have a problem using your card on the island if you do not inform your bank that you are traveling overseas.

Jamaican money and when to use them

It is good to know its value if you plan to spend Jamaican money. You could waste your hard-earned money or take advantage of it without knowing. I will show some Jamaican banknotes, the USD value, and the best time to use them.

The JMD 5000 is the most significant bill in Jamaica. It came into circulation because the Jamaican currency lost its value; therefore, it took more money to pay for things. This note makes it easier to travel with more cash.

It is equivalent to about 32 USD. The Jamaican currency is fluid. Therefore, the value might increase or decrease. Based on the trend, it is more likely to drop.

Use the J$5000 to make a more significant purchase, for example, shopping at a supermarket or a meal for two at a local restaurant. Do not use it to pay taxi fares or purchase simple items from a street vendor.

Caution! The J$5000 has a similar shade to the $500 though the features are different. In low light, you can mistake the $5000 for $500 at night. Please check before making payments, especially after dark.

The government recently introduced the J$2000 bill. Unfortunately, it was not in circulation at the writing of this post. However, it is between J$5000 and J$1000, so it’s easier to make change without walking with a stock of $1000s.

The J$2000 equals about 12 USD at the current exchange rate. You use this to buy patties and drinks for four people. Get water and a few beers at the shop. Do not use to pay for route taxis or buses. They like exact change or close to the amount.

The Jamaica $1,000 or Manley is half the $2,000 note. Its value is around 6 USD. It can get about three red stripe beers at a shop or a meal for one person at a cheap restaurant. You will need a few $1000 bills if you go grocery shopping.

You can use it to pay for route taxi and bus fares, but some drivers might get upset, especially if it’s early morning when they are likely not to have any change. On the other hand, it makes an excellent tip if you feel generous and want to tip someone.

The Jamaican $500 or Wraphead or Nanny is one of the most famous notes in Jamaica. It is half the $1000 not used for many transactions, such as paying fares, buying phone cards, and minimal items. You can pay for one patty and a drink at the local patty shop.

The J$50 is the lowest Jamaican banknote. It doesn’t value much and is used primarily for change. Its value is 0.32 USD.

Jamaican coins value little and are used for change from shops and supper markets. The Jamaican coins are $20, $10, $5, and $1. Some people don’t spend; they save them in jars and exchange them at the bank. I can’t think of any $20 coin I could buy in Jamaica apart from sweets. While a few coins don’t value much, a jar could be a few thousand. Therefore, please don’t throw away your coins; save them and use the $20 currency to pay for small items such as water or fruits.

Is the Jamaican dollar valuable?

When Jamaica changed its currency from pound to dollar in 1969, the value was almost equal to the USD, costing 1.20JMD for 1USD. From 1972 to 1970, JMD valued more than the USD, costing an average of J$0.89 for 1USD. However, there has been a decline in the value of the local currency since that period. The most drastic devaluation started in the 1990s and continued into the 2000s.

Where to exchange Jamaican currency

The best places to exchange Jamaica money are commercial banks, Cambios, and hotels/resorts. In the arrival and departure areas, you can also change Jamaican currency at Montego Bay and Kingston airports.

Banks, Cambios, and larger hotels/resorts will exchange USD, British pounds, Euros, and Canadian dollars. As a result, the exchange rate will differ between banks, resorts, and stores.

However, you will get the best rates from Cambios. These are the most popular Cambios in Jamaica, Lasco Money, and FX Trader. You can find them at the mall and shopping centers all over the island.

Can I get USD from ATMs in Jamaica?

Some ATMs in Jamaica give the option of USD or JMD; Scotia Bank Jamaica and First Caribbean International Bank (CIBC)are two of them. There are also money machines at some resorts that also give both currencies. Withdrawal from ATM will cost you anywhere from 2 to 6 percent.

Apart from ATMs that issue dual currency, other local banks allow you to withdraw Jamaican dollars. Your card is most likely to work anywhere you see the multi-link sign.

History of the Jamaican currency

Before they put the Jamaican dollar into circulation in 1969, the currency circulating was the pound sterling.

On January 30, 1968, the Jamaica House of Representatives unanimously approved the introduction of the dollar, which replaced the Jamaican pound.

The Committee also recommended that the new coins be of the same size and weight as the denominations in pounds, shillings, and pennies to which the public had become accustomed.

They recommended portraits of national figures to replace the queen’s images and incorporate the motto into the design. They also considered it convenient that the new banknotes had the same size and primary colors.

In 1999, the $10 coin replaced the $10 note. In March 2000, BOJ put a $ 1000 bill into circulation, and in July of the same year, a coin replaced the $20 bill. It carried the portrait of the national hero Marcus Garvey and was the first bimetallic coin to be produced by Jamaica.

The Jamaican currency is the dollar, and the Bank Of Jamaica issues and controls the island’s currency. Up to 1968, the British Pound Sterlin was Jamaica’s currency, but parliament changed it. As a result, Jamaican money reflects the history and natural features of the island and showcases those who helped shape modern Jamaica.

Since the 1990s, the Jamaica dollar has lost significant value, making it more costly to buy imported things overseas. In addition, the constant devaluation of the dollar causes some notes and coins to be worthless, so they are replaced with notes that value more.

Apart from the Jamaican dollar, they accept the USD, especially in tourist areas where prices are in USD. In addition, the Canadian dollar and the pound are popular currencies you can easily exchange for JMD.