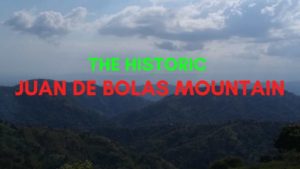 Jamaica is synonymous with lush green vegetation, white-sand beaches, and crystal clear water. These natural occurrences attract millions of tourists yearly. However, mountains are significant features of the country’s landscape, are being ignored.

Despite the beauty of Blue Mountain and its world-famous coffee, tourism interest has not done enough to take advantage of its potential. So instead, they focus on the Island’s coast.

Juan de Bolas Mountain, which plays a significant role in Jamaica’s history, is another place that does not get any attention. Only those who know our heritage and people from the surrounding neighborhoods are aware of this gem.

A View from the top of the Juan de Bolas Mountain

This mountain got named after a famous Jamaican. Infamous depending on which perspective you view the Island’s history.

Kentish is a tiny village that sits at the top of this peak. Point Hill, Garden Town, Water Mount, Juan de Bolas (the village), and Lluidas Vale are neighboring communities.

They depend on agriculture for a living. Worthy Park Sugar Estate, a 350-year-old plantation in Lluidas vale, is many residents’ primary employment source.

Lluidas Vale, the largest district in the area, has a police station, a market, a post office, and the only gas station available for miles. There are also some hardware stores, a few shops, and bars.

View of Juan de Bolas Mountain from a nearby village

Kentish has the mountain’s best viewpoint

Kentish is a sparsely populated village with a few abandoned houses. Most of the inhabitants moved to Saint Catherine and Spanish urban areas or migrated overseas.

There are few churches, shops, and several communication towers, taking advantage of the high altitude.

The climate is like Mandeville or New Castle. It is cool but nearly freezing during the winter or rainy season, especially at night. If you cannot tolerate cold, this place might not be to your liking.

Beautiful landscapes surround Kentish; looking in any direction, you will only see picturesque terrain.

Clarendon plains and parts of Manchester are also visible. The mountain peaks fluctuate from Saint Mary to Saint Ann, like images of an unstable radio wave. Lush green vegetation carpets every inch of these terrains.

Kingston city is far away, with the blue mountain towering behind it. Nevertheless, Portmore and Saint Catherine’s vast under-use farmlands are visible.

At night lights create a clear channel to guide ships into Kingston Harbour.

Planes taking off and landing at the Norman Manley International Airport is a beautiful sight, especially at night. They get so close to the mountain that you could touch them.

Aircraft touching or crashing into the mountain is not far-fetched because it happened in Juan de Bolas Mountain.

Locals tell stories of a small plane crashing into the peak years ago. It was a foggy day, and it did not have enough altitude to clear the summit. Tragically everyone on board died.

Juan de Bolas and the lands he roamed played a vital role in Jamaica’s history. These areas were the gateway for the British expansion inland after they invaded Jamaica in 1655. Juan de Bolas was the gatekeeper who gave up the key.

During the English Invasion, the Spanish ran to the Mountains and allied with Juan De Bolas and his associates. They attacked the British regularly and forced them to remain on the plains. Finally, however, Juan De Bolas switched allegiance and led the English to the hideout of Spaniards and their allies.

This was the turning point in the war against the Spaniards and their Maroon alliance. The British soldiers ambushed and killed some Spaniards; the rest they deported to Cuba.

For betraying the Spaniards, Juan De Bolas and his followers got 30 acres of land, freedom, and Jamaican citizenship. They also made him a colonel of the black militia and gave him the title Chief Of All Maroons.

His coalition with the British threatened the maroons, who did not surrender.

Juan de Serras, a maroon loyal to the Spaniards and his men, killed Juan de Bolas in an ambush before he could lead the British further into the mountains. Descendants of those people later fought the English to a stalemate.

The mountain that gave the Maroons a strategic advantage in their first war got his name, also a village. They immortalize him in Jamaica with children’s books and the story of his heroics taught in schools. However, some members of the Maroon communities saw him as a traitor.

His betrayal helped the British get a firm hold on the Island when they were discouraged. However, the constant raiding by Spaniards and Maroon, disease, and their inability to farm the land took its toll.

Access to Juan de Bolas mountain and surrounding areas helped the British push the marron further inland. It also gave them access to land for cultivation.

At the foot of Juan de Bolas mountain in Lluidas Vale is the Worthy Park Estate which occupies over 10,000 acres of land. This is one of the oldest sugar estates in Jamaica and has operated continuously for 350 years.

This estate produces sugar for export and rum. Many people from the surrounding communities work there.

There is a breathing taking view of the estate when traveling from Ewarton. You can see the plantation and the snake-like roadway at the corner of the windy road.

What is there to do at Juan de Bolas Mountain?

Apart from beautiful landscapes and a scenic view, there is no other attraction. However, it is a lovely place to go if you want to escape the city or crowded tourist spots.

Choose a lookout point, grab a chair, and enjoy the cool mountain breeze massaging your skin. Then, drink at one of the two bars in the district. The area is safe so that no one will bother you. Like most Jamaicans, the residences are friendly, so it is easy to converse.

If you are lucky to find someone who knows history, you will learn a lot. For example, they might show you the remnants of slavery in the area and stories about Juan de Bolas and the Maroon wars against the British.

Doric’s Bar is the only entertainment spot in the area

Before trekking to the mountain, stopping at Worthy Park Estate would be marvelous. They are the producer of Rum Bar rums, a popular alcohol brand on the Island.

They have operated continuously since 1670. You can tour their rum distillery and storage, but you must make a reservation. Call or visit their website. They cater to locals and visitors, costing US$20 per person.

It will cost US$70 if you are a tourist and you need transportation to get there.

If you visit the Island, Juan de Bolas mountain is the perfect escape from mass tourism.

This place should be on your list for weekend explorers because of its historical significance. Also, the rejuvenating feeling you get from spending time there. So make the trek and share your experience.