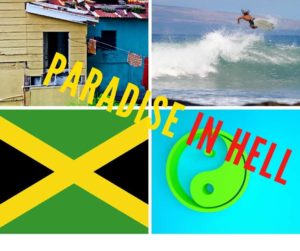 Although small, Jamaica is a special place; its cultural influence is global. Despite its size and limited resources, the Island has achieved much in sports and music.

Tourists flock to the Island’s shores, amazed by the beauty; they call it paradise. However, the one-drop rhythm of reggae with the melodious voice of Rasta preaching one love contrasts with what life is for some of its inhabitants.

So, what is it like living in Jamaica? These words tell the Jamaican experience perfectly: joy, sadness, paradise, hell, riches, poverty, brilliance, stupidity, life, and death.

Jamaica is a place of contradictions.

Two million seven hundred thirty-four thousand ninety-two people lived on the Island in 2019, according to statistics from the Statistics Institute Of Jamaica (STATIN). With a median age of 29.6 years, 29,874 are more females than males. Some Jamaican men will have you believe women outnumber men two to one, but it is not valid—only a justification for dating multiple women.

Many people come to the Island expecting to see Rastas on every corner, smoking weed and saying ‘everything ire mon.’ Cannabis dispensaries at each turn, everybody high and mellow.

After smoking a few blunts, that would be a pleasant fantasy but not the reality in Jamaica.

Rastas make up a small portion of the population, and most Jamaicans don’t smoke weed. Although easily accessible, having over 2 ounces in public is illegal. Only a few dispensaries sell legal marijuana on the Island.

It is a shocker to some visitors that Jamaica is a Christian nation, and just a few practices the Rastafarian religion.

This perception of Jamaicans being Rastas is tattooed on the minds of many because of reggae music. In addition, Clever marketing by tourist interests further reinforces this idea.

Jamaica, a small nation but big on influence, has a representation of most members of humanity. They say the Island is a melting pot, but 92% of the population identifies as of African descent.

Cost of living in Jamaica

The cost of living in Jamaica is high because of the low value of the country’s currency and high production costs. They peg the cost for most items to the US dollar, but not the Jamaican currency.

Crude oil, an essential material for energy production, is purchased in US dollars. The low-value Jamaican dollars make it expensive to import this item. At the post’s writing, it cost $148 Jamaican for $1 US. Energy affects all parts of productivity, is high cost, and makes goods and services expensive.

Jamaica depends on foreign products; clothes, medicine, food, chemicals, transport, electronics, and construction materials are mostly imported. Although consumer products are valued based on the US currency, salaries are not. Therefore, Jamaicans have little spending power.

Another thing that drives up costs is the huge import duty, taxes, and fees on items coming through the Island’s port. For example, owning a car in Jamaica could cost twice that of a similar vehicle in the United States.

Most Jamaicans live in the Diaspora.

Jamaicans like to boast about their country, especially during the Olympics or international events. They are patriotic and proud people, but some will leave their homeland in a heartbeat, never to return.

Thirty-six percent of Jamaica-born people live overseas, over 1.3 million people, according to 2018 estimates by the International organization of Migration (IOM). Statistic from the STATIN shows that 34,602 Jamaicans migrated in 2019.

Based on the official numbers and Jamaican immigration history, more people with Jamaican heritage may live overseas than on the Island.

Jamaicans immigrating to other countries to seek better opportunities started in the 19 century. They traveled to Costa Rica and other South American countries to work on banana plantations. The number increased in the 1880s when French companies recruited them to construct railways and the Panama canal.

This trend continued when the United States took control of the canal construction from France in 1904. As a result, several Jamaican communities in these countries and people trace their roots back to Jamaica.

Most Jamaicans migrated to the USA, Canada, or England. Yearly, thousands of them leave the Island to better themselves and help relatives back home. In 2019, remittance to Jamaica was 15.64 percent of the GDP.

Jamaica has all the convince of modern life, utility, paved roads, and access to quality healthcare. Moreover, most things in developed countries are accessible once you have money.

Jamaica is paradise or hell for those without money if you are rich.

The minimum wage in Jamaica is $7000 per week or $ $28,000 per month. That is about half the per capita earnings per year. Several people earn little above or below minimum wages, which is insufficient to sustain them. Therefore, they struggle to provide for the basic needs of their family. Some find creative means of serving _ hustling, or participating in illegal activities.

High-crime areas are the only affordable place for them to live.

Crime, including murder, is a frequent occurrence. Sand, sea, and all-inclusive resorts are foreign to them. Some residents never travel outside of their communities. They hear more gunshots and see more bodies than some combat soldiers.

Some of the most creative and talented Jamaicans come from these areas.

There is never a dull moment in the inner cities; people are always in a festive mood on the street. There is always music playing or a party going on.

Despite difficult living conditions, they seem to be the happiest people on earth. Loud talking, laughter, fun, and enjoyment are constant.

But in the blink of an eye, the mood changes. Gunshots, people running for cover, or to see who is dead. Laughter quickly turns to mourn—another killing by the police or murder by a gangster.

Statistics on crime in Jamaica.

Life in rural communities is less eventful and contrasts with inner cities. Though they face hardship because of the lack of money, their lives differ. Life is peaceful, and gun violence is not as common.

They supplement their income with farming. Items that city folks have to purchase are available in their backyard. Although food is easy to get in most rural communities, access to water is a problem, especially during droughts. People living in some rural areas depend on rainfall, springs, or rivers, which ration when there is no rainfall.

The Road network in some rural communities is under-develop which makes access difficult. Healthcare is accessible in some towns where there are clinics or private doctors. However, they must travel to Kingston for emergencies and specialist treatment.

With budgeting and discipline, middle-income earners in Jamaican live comfortably. They live in safer neighborhoods and don’t face the same level of violence as some inner-city communities. Most residents complete high and have a territory education.

They are a part of the formal economy, working for a co-operation, the government, or own a small business. Despite having a steady income, homeownership is a challenge. Sometimes they have to save for years to afford the down payment for a house and combine with a partner to afford the mortgage.

They don’t live in luxury but can afford most things necessary for modern living—some visit local attractions on holidays or vacation at resorts.

Middle-income earners not only live in urban areas but also rural communities. They are farmers, small business people, or returning residents.

High-income earners and the upper class enjoy the Island’s best. Their children attended the best schools locally in North America and Europe. Drive high-end vehicles and vacation at private villas and top-end resorts.

Interaction with the average Jamaican is minimal because they live in exclusive neighborhoods not accessible to everybody.

Upperclass Jamaicans get the best healthcare money can buy. They use private hospitals and travel to North America when they need specialist treatment.

There is never a dull moment in Jamaica; it would be a hit if the Island were a Netflix series. Colorful politicians, world-class athletes, entertainers, top scholars, inventors, crime, and the people’s resilience _ the world would be glued to their TVs.

Beautiful resorts, natural attractions, and people have drawn over three million tourists to the Island annually.

In Jamaica, they say, “no problem, man,” but that is not true.

Citizens face a mountain of issues, migrating their best solutions. Lack of opportunity, high cost of living, and crime, the barriers to upward mobility force some people to leave.

Few Jamaicans get to enjoy the resorts or attractions on the Island. Some don’t even know they exist. Prices are out of their reach, or they don’t market to locals who can afford them. One month’s salary of a person earning minimum wage cannot pay for a night at a three-star resort.

Jamaica is an excellent place to live_ nutritious food, loving people, and sunshine. However, everything is not perfect. Murder and corruption are issues that need fixing.

Despite the high cost of living, life on the Island would be better if crime and corruption were under control. As a result, we would have better roads, improved government service, and more investment.

Citizens would not have to migrate to better themselves, and tourists would feel safer visiting the Island.