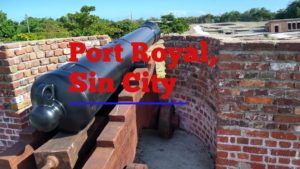 Locals are excited about the renewed interest in their forgotten city.

Destroyed by an earthquake in 1692, Port Royal was a wealthy city. Then, a massive 7.2 earthquake sunk 70 percent of the town, under thirty-forty feet of water. About four thousand people died in that disaster; some were killed during the earthquake, and others from the Tsunami and disease.

The forces of nature thwarted every attempt at a reconstruction of Port Royal. The earthquake was not the only force of destruction but also fire and hurricanes.

After a fire in 1702 destroyed the first attempt at Port royal reconstruction, five hurricanes followed in 1712,1722,1726, 1744, and 1951. Kingston had long become the commercial capital before the visit of Hurricane Charlie in 1951. Therefore, the city was already desert when it struck, taking all remnants of the old city.

Pirates of the Caribbean

Pirates of the Caribbean, although fictional, gave a good depiction of what Port Royal was like before the earthquake. Imagine a haven for pirates whose sole purpose was to rob and destroy ships on the high seas. Mainly Spanish ships packed with gold and other valuables stolen from the Americas by the Spanish crown.

In the Jamaican colloquial saying, “Thief from a thief, God laugh,” the pirates did not amuse God. On the contrary, God must have been angry with them for them to receive such wrath. It was like the hand of God fell on the city, sinking it forty feet under the Caribbean sea.

The ensuing Tsunami, plus the disease that followed, ensured that the death toll was high. Almost half of the pollution of about 9 thousand people perished.

Drunkenness, gluttony, overindulgence of all kinds, and murder were synonymous with the streets of Port Royal. Squandering their ill-gotten earnings on rum and prostitution was the pirates’ way. Spending in one night what planters spend in a year was a common practice.

Brothels and rum bars were on every street corner. It was common to see a drunken pirate with two or more women walking down the streets of Port Royal. Squandering their money on rum and prostitutes, most pirates ended up penniless soon after amassing a fortune.

Settling disputes in the street by brawling was common. The strong preyed upon the weak with few laws to protect them. After the earthquake, lawlessness took over, and it was every person for himself.

The most famous pirate

Henry Morgan was the most famous pirate in the history of Port Royal. He was from Wales; he came to Jamaica during the 1655 invasion. Henry Morgan had a colorful career and played many prominent roles in Jamaica. He was even the lieutenant governor of Jamaica and acted as a governor on three occasions.

Issued with a letter of marque by the British government, it was legal for Henry Morgan to raid ships belonging to Spain because Spain and Britain were at war. However, the signing of the treaty of Madrid in 1670 made privateering illegal.

Henry Morgan led one of his most successful raids on Panama, capturing the city and holding the people for ransom. He left after striping the city of valuables and collecting ransom. The citizens were raped and tortured for information on valuables hidden in the city. The raiding of Panama was a diplomatic nightmare for England because it threatened the peace treaty between Spain and England.

They charged Henry Morgan with piracy and sent him back to England. In his defense, he claimed ignorance of the treaty between the two countries. His arrest was more to appease Spain and prevent an international crisis rather than prosecuting him for piracy.

He did not face the courts when he returned to England. Instead, the people give him a hero’s welcome. The King also knighted him. Henry Morgan returned to Jamaica in a few years as lieutenant governor.

Henry Morgan bought many properties with the fortune he made from privateering. He was the owner of three large plantations. In the capacity of a plantation owner, he also fought against Juan de Serras and pushed the Maroons further back into Blue Mountain.

Henry Morgan died in 1688 in his early fifties from tuberculous, without a child. However, a close relative inherited his estates, provided that he carried on his name.

The line between pirates and privateers is often blurred, with the words sometimes substituting for each other. But they are different. Privateer is legal, while pirate is illegal even though they carry out the same functions. How is that possible?

Let’s take a closer look. Privateers are citizens of a state acting on behalf of a government to attack its enemies at sea. They are given a letter of marque, a legal document issued by the government they work for.

Whatever is gained by raiding ships or territory is shared among the government, Captain, owner, and crews. Privateers can work for any government. All they need is a letter of marque from that administration. They treat privateers like prisoners of war when captured.

Piracy is illegal. Pirates act on no one’s behalf, and they follow no rules. They raid whichever ship they feel, sharing the bounty among themselves. They usually hang pirates as punishment for their crimes.

Privateers and piracy were extensive businesses with several people profiting—the owner of the ships, captains, and the state that issued the marque.

Port Royal’s glory days have long been over. It now looks like a place struggling for its existence. I can’t believe this was once the wickedest or most prosperous city on earth.

You get a laid-back vibe in town with people hanging out on their porches as if there is nothing better to do. However, everyone seems warm and friendly; it would be easy to initiate a conversation.

Streets in most areas are clean, even though sections of the town would do well with a paint job. For a place with much potential, I expected to see more done toward its beautification. The street is safe to walk at night because Port Royal’s reputation as the wickedest city is long gone. It is peaceful and safe, with hardly any report of a crime.

Plans are in progress for the town redevelopment. There are constructions taking place. The Morgan Harbor hotel is getting a facelift. The cruise ship pier is under construction for the official opening in March.

There are a few bars in the town where you can drink like pirates. On the side closer to the fishing dock is one of two Gloria’s restaurants. It is a pleasant place to have Jamaica’s seafood. However, it might not be a good idea if you are in a rush because waiting can be long, especially on weekends or holidays.

What to do in Port Royal

Fort Charles is a marvelous place to tour and learn about the history of Port Royal. You can pay the entry fee of $1500 for locals and $14 us dollars for tourists. You can tour the area by yourself or with a tour guide. I would recommend getting a tour guide. They are primarily locals with extensive knowledge of the place. You would probably learn something you didn’t know before.

The cannons are in their original state or on display over thirty. The living quarters of the Captain of the Port Charles are still on display depicting what it was like when the Fort was active. Not as excited as when I was a child, but the Giddy house is still there. On my last visit, it was under construction, so some areas were inaccessible. There is also a gift shop inside with Fort Charles memorabilia.

Fort Charles is not for everyone. If you are the adventurous type who likes action, it is boring. However, for those who love history, it is interesting.

St Peter’s Church, just outside the entry to Fort Charles, is another place you can visit. Built-in the 1700s and is still mostly in its original state.

Nearby is the JDF coastguard base and a Caribbean Maritime University CMU section. The bus stop is opposite St Peter’s Church if you want to return to Kingston.

There are several bars in the area, and they are safe to have a drink and chat with locals. At the same time, listening to soothing reggae music. In addition, they will be happy to educate you about their community’s history.

Yes! Port Royal has a beach.

Though not pristine like the white sand beaches of Negril or other locations in Jamaica, it is still lovely. There is an unending stretch of black sand beach perfect for long walks with your partner watching waves and counting ships making their way to the Kingston harbor. The ships pass close to the beach; a powerful swimmer could catch one.

You can swim if the tides are not rough; however, you will swim at your own risk. There are no lifeguards. It usually’s quiet during the days with few locals but a lot busier during the holidays.

This is not the beach where you find tourists sunbathing. Instead, you will find locals swimming, jogging, playing football, or walking with their lovers.

There are also a few bars along the beach that give a friendly, chill vibe. Kingston’s people mostly hang out there when trying to get away from the city.

The beach is underdeveloped but safe.

Please note that there are no changing facilities or bathrooms along the beach. However, Gloria’s restaurant is just a few meters away, and a few bars in the area may help you if you have a bathroom emergency.

Port Royal beach is safe to visit if you are trying to escape mass tourism. However, just like traveling anywhere else on the planet, don’t do stupid things. Whatever precaution you would take at home, do the same. However, the area is crime-free with its redevelopment, and persons from outside moving in might change.

The redevelopment of Port Royal is happening; so far, two cruise ships have docked. There is a grand opening planned for March 7, 2020. The community is getting beautified, and attractions are being upgraded. There has been a long wait for this to happen, but it is here. Once dubbed the wickedest on earth, Port Royal is getting a new lifeline.

Port Royal is no longer a haven for pirates but is turning out to be a place where people can escape life’s stresses. So have a drink, look back at history, and count ships sailing in and out of the Kingston harbor while watching the sunset.

Whether you are a local tourist or coming from overseas, give Port Royal a visit and learn about its rich history. Jamaica is more than just sun, sea sand, and all-inclusive hotels. Start your journey here and discover something different and uniquely Jamaican.