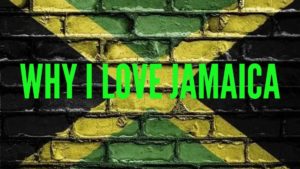 Known for many things, such as music, sports, weed, and all-inclusive hotels. Love by many and attracts over 3 million tourists annually. Jamaica holds a special place in many people’s hearts, including mine.

Why do I love Jamaica?

Why I Love Jamaica is more than just clips from a tourist brochure.

Yes! Jamaica is my home.

That is reason enough to be in love with Jamaica, but there is much more.

Here are some reasons I love J.A.

The food is one reason I love Jamaica.

Not to be cliched or sound like I am promoting for the Jamaica Tourist Board, but I love Jamaican food. As the national motto says, “out of many one people.” If there is such a thing, the food Motto should say, “Out of many pots, great food.”

Jamaican food is an infusion of foods from many cultures. The indigenous people gave Jamaica the famous Jerk Pork.

No. A jerk does not mean the shaking meat or someone who mistreats others.

The indigenous people of Jamaica (Arawak) used smoke to prepare and preserve their meat; the early settlers (Spaniards) adopted this food preparation method and called it Jerk.

Local herbs and spices, and seasonings from different cultures blend to make the perfect jerk sauce, giving the meat a mouth-watering flavor. Eating Jerk pork or chicken without Jamaican Jerk sauce would be blasphemous. The sauce made from scotch bonnet paper, herbs, and spices give the meat a heavenly taste.

Although you can get jerk meat anywhere on the island, Boston Jerk center in Portland, Jamaica, is the best place to get authentic Jamaican Jerk.

Every Nationality that settled in Jamaica contributed to our food. The Chinese brought rice; the Hindus brought curry and other spices; the English brought ackee from Ghana and breadfruit from Tahiti island. Roasted breadfruit combines ackee and salted fish to make one of my favorite dishes.

Be cautious when preparing ackees; they can be poisonous under certain conditions. It must mature and open naturally to release toxins.

Consuming unfit ackees is a sure trip to the ER.

A wide variety of fruits is another reason I love Jamaica.

Jamaica is in the tropics and produces a wide variety of fruit year-round. Whether you carve the succulent juice of mangoes, the refreshing taste of Otaheite apples, or the exotic taste of star apples, depending on the time of year, it is available in Jamaica.

It is common to find fruit trees in most Jamaican yards, either in the country or urban areas, especially my favorite, mango.

During the summer, when mango season is at its peak, ripe fruits hanging over fences in urban areas are common. While in rural areas, mangoes can be found along the roadways and scattered over the hillsides. In most rural areas, you can pick as many mangoes as you like and eat at leisure.

The availability of fruits such as mangoes, apples, pineapple, custard apples, guinep, guava, and star apples is one reason I love Jamaica.

Our great sense of humor is why I love Jamaica.

There is never a dull moment in Jamaica; there is always something to smile or laugh about. Whether you are working with friends or family, someone always cracks jokes. Jamaicans take pleasure in making people laugh.

Any Jamaican telling their story about the most dangerous adventure, I bet it is humorous.

Visit any popular bar on the island; you will find someone entertaining patrons with hilarious stories.

Our biggest cultural ambassador, Miss. Lou used the Jamaican language to tell humorous and interesting stories. She captured the imagination of Jamaicans and foreigners.

The love of family

Family plays a vital role in every Jamaican’s life. I am not only talking about immediate family members. But other relatives are related by blood or marriage.

A family gathering is a regular occurrence in Jamaica, especially during Christmas. At this event, you would see family members from all over the island and overseas.

The smell of alcohol, loud music, banging of dominoes tables, mannish water, and curry goat would dominate the atmosphere.

Jamaicans will come up with any excuse to have a family gathering.

Cleaning the family plot or putting on a headstone is usually a festive affair.

I have fond childhood memories of these events that is why I love Jamaica.

The music is why I love Jamaica.

When most people talk about Jamaican music, they only mention popular music such as Reggae and Dance Hall. I love and enjoy both, but the Folk song, Set up songs, and old church songs hold a special place in my heart.

Telling stories and doing work easier was maintaining the purpose of Folk songs and entertainment. They taught these songs in schools when I was a child. Hearing folk songs brings memories of when I was young, innocent, and carefree.

There is a tradition in Jamaica where people visit a dead person’s house until burial. A Set-Up or Wake is kept to celebrate the deceased’s life the night before the funeral. Singing, and dancing, are accompanied by drinking rum or other alcoholic beverages, mannish water (Ram Goat soup), eating white rice curry, goat and fried fish, and bread.

I looked forward to these occasions when I was a child. It was fascinating to observe, especially the singing by older folks.

Childhood memories of intrigue take over whenever I hear these songs.

Whenever I am at church in the country am always touched by the singing of older folks. I hear the voice of my grandma in those old ladies. I usually have flashbacks of attending church with my grandmother.

Achievement, despite our size one more reason I love Jamaica

Despite being a small nation, Jamaica continues to do well on the international stage. With a population of under four million, Jamaica consistently achieves.

Jamaican food, Music, religion, sporting performance, scientist, and leaders have impacted the world. Aspects of Jamaica’s culture have been copied by many people, even those cultures thousands of years older. Places such as Japan and parts of Europe that do not speak a word of English can sing every line in many Reggae songs.

It is not a recent phenomenon for Jamaica to stand out on the international stage; this has been happening for quite a while. Jamaica was one of the first places in the Americas to construct a railway system in 1845, before even the USA. Towns in Jamaica had electricity and running water before major cities in North America, such as New York.

The most influential Jamaicans.

Mention Jamaica to anyone in any remote region of the world, and they will associate Jamaica with Bob Marley or Usain Bolt. Despite Jamaica’s reputation in reggae music and track and field, it is not the only field with high achievers.

Start a discussion about black leaders in America, and you will hear Marcus Garvey. His philosophy has influenced millions of oppressed people to stand up for themselves. The teachings and philosophy of Marcus Garvey are still popular, despite his being dead for over fifty years.

The Rastafarian religion started in the 1930s in Jamaica; it is influenced by Marcus Garvey’s teaching, even though he was a Christian. This religion preaches peace, love, and the liberation of African people. Reggae music made Rastafarian popular on the international stage in the 1970s. Most of the reggae pioneers are Rastas, the most famous being Bob Marley.

One of Jamaica’s most famous nationals alive is Usain Bolt. Mention anything about the fastest human; his name will dominate that discussion. He is in the world’s top ten most recognized faces. There are few in track and field with whom Bolt’s achievement we can compare.

Despite Usain being the greatest, he is not the only Jamaica Track and field athlete to have done great things. From as far back as the 1940s, Jamaica has been doing great in that sport.

Even during the Usain Bolt era, his teams, both males and females, have been great at the Olympics—names such as Shelly-Ann Frazer-Pryce, Veronica Campbell, and Asafa Powell, or just a few.

Warm tropical weather is available twelve months of the year; there is no cold or snow to contend with. The hottest temperature of 36.9 C was recorded at the Norman Manley International Airport In Kingston, pale compared to other parts of the world. The coldest recorded weather in Jamaica of 13 C would be a warm day in some parts of the world. Jamaica enjoys a yearly average temperature of 25 -26. Consistent, pleasant weather is one reason I love Jamaica.

Freedom is one primary reason I love Jamaica.

Jamaica gained independence from Britain in 1962. With this independence, the country could rule and determine its path. However, many battles were fought before Jamaica got to this point.

Battles against the British by Maroons are familiar to most people. This resulted in a peace treaty being signed in 1739-1740. This, however, did not bring freedom to the entire population—only the Maroon communities.

Fighting for freedom was constant by the enslaved. The killing and destruction of many plantations were the results. Names such as Tacky, Paul Bogle, and Sam Sharpe are synonymous with Jamaican’s struggle for liberation.

At a point in our history, there was a plot to take over the entire island by the enslaved people. This was foiled because a slave was too afraid to kill his master. This resulted in salve confessing, and the capturing and execution of the masterminds followed.

Our rich history of fighting for freedom is responsible for our unwillingness to conform to unjust rules. This is the reason we enjoy so much freedom on the island.

People who don’t understand our culture might think Jamaicans are unruly, but that is not the case; we like to be free. We hate anything or anyone that restricts or takes away our freedom. Wanting to be free and the level of freedom that we enjoy is why I love Jamaica.

The natural beauty of the island.

Jamaica is an exquisite island.

A lush green mountainous range with fresh rivers and beautiful waterfalls is perfect for hikers and adventure seekers. Reach Falls, Blue Hole Falls, Dunns River Falls, and YPS falls are just a few of the many falls in Jamaica.

A hike on Blue Mountain or John Crow mountain is a must for hikers visiting Jamaica.

Limestone caves that tunnel all over the island are perfect for explorers. Green Grotto Cave and Two Sister Cave are just a few of the extensive networks of caves on the island. There are 1000 known caves in Jamaica.

Many species of birth, butterflies, and other indigenous plants and animals make Jamaica a unique place.

Blackbill and the Redbill parrot are just two of the many indigenous birds on the island.

Species of butterflies such as Jamaica’s Giant Swallow Tail and the Jamaican Mestra are a few of the many beautiful butterflies on the island.

Jamaica’s Natural beauty, food, fruits, music, sense of humor, achievement, and wonderful weather are why I love Jamaica. And Jamaica is my home. That is reason enough to love J.A.